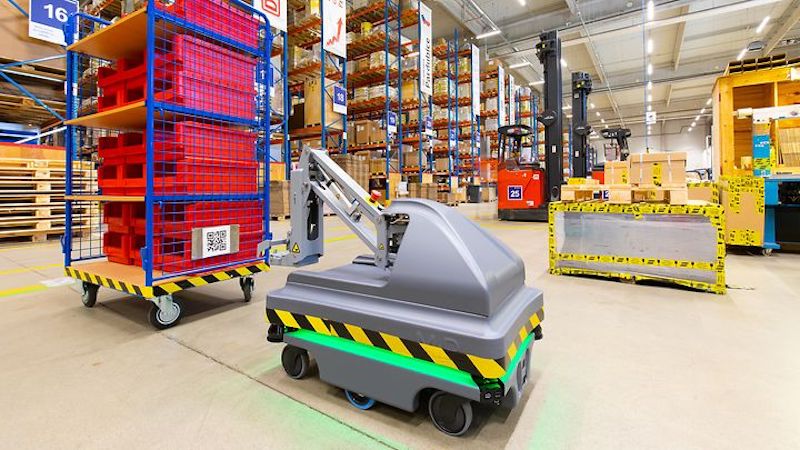 Equipped with a 3D camera and laser scanner, the MiR Hook 200 can automatically detect trolleys ready for pick up by scanning the related QR codes in predefined zones, or by triggering the next task via any mobile device. The robot’s double battery provides an operating time of 16 hours, after which the AMR is sent to a charging station and fully recharged within three hours.
At its Contract Logistics site in Pardubice DB Schenker has implemented a new autonomous mobile robot (AMR). In the warehouse around 120 kilometers east of Prague, the robot named MiR Hook 200 helps to detect and transport trolleys to make operations even more efficient. The robot comes from the Danish technology company Mobile Industrial Robots (MiR) and was deployed in cooperation with DREAMland, a Czech distributor and integrator of autonomous and collaborative robots. While DB Schenker is using autonomous machines in various countries already, the new installation is the logistic company’s first robot in the Czech Republic.

With a maximum towing payload of up to 500 kilograms, the robot can avoid both moving and stationary obstacles and adjust its route independently. It did not need major infrastructure changes for its implementation and could be deployed almost immediately with minimal investment. The MiR can additionally be easily converted to meet changing requirements with exchangeable add-on modules. The programming is done through an intuitive user interface, has a short installation time and could be programmed by DB Schenker staff, eliminating the need for a dedicated technician.
In Pardubice, DB Schenker employs over 100 workers and operates a logistics center with a focus on customers from the industrial and aerospace sectors. The logistics center has a total area of 70,000 square meters, five halls, a direct motorway link to Prague, and its own rail siding where up to six freight wagons can be loaded or unloaded simultaneously.